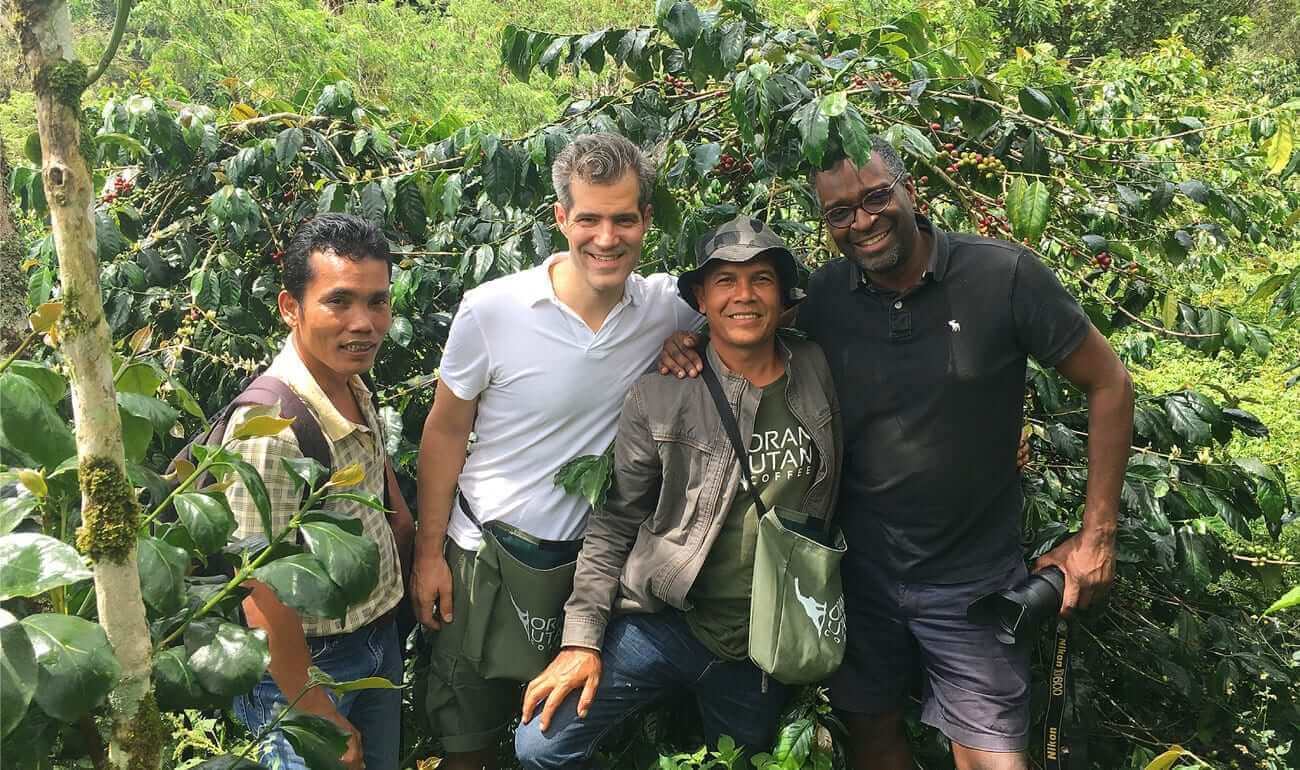 In March 2017, Kurt and I visited the coffee farmers in northern Sumatra. We were warmly welcomed at the airport in Medan, Sumatra’s largest city. The itinerary included a visit to the Orang-utan Conservation Project near Medan and a trip to the coffee farmers in the province of Ace, about 400 km north of Medan.

We drove to Leuser National Park, four hours west of Medan, to the Orang-utan Project in Bukit Lawang. There, the Paneco Foundation, set up by Regina Frey, operates an eco-lodge from where orang-utans can be observed in the wild on jungle trails.

The drive was long and the road was full of potholes. The traffic in Medan is really bad, with a daily traffic jam from 6 – 10 o’clock in the evening! Outside the city it quickly became clear what this region’s main source of income is: palm oil.

Palm tree after palm tree stretches as far as the eye could see. These plantations are already 30 years old and the palms stand at a staggering height of 20 meters. The farms extend to the foot of the mountains, where the steep slopes make it economically unviable to cultivate palm oil. This is why the 8000 km2 Leuser National Park was established on the mountain slopes. The last approximately 5000 surviving orang-utans still live in this park.

It was already dark when we reached the village of Bukit Lawang and crossed a wide river on foot via a suspension bridge to reach the eco-lodge on the outskirts of the jungle. The very next morning, we had our first sighting: After only five minutes we discovered the first two orang-utans, a mother with her four-year-old boy. Most striking was their ochre fur, which contrasted with the light green foliage of the trees. The pair hung about ten meters above us in the branches, with the boy curiously playing with the vines. Only a few hundred meters further on, we had our next encounter with an orang-utan. A male with impressive flaring nostrils and a very long, shaggy coat cavorted in the trees. Our guide noticed him and pushed us into the path in front of him. The orang-utan promptly climbed down from the tree and to my surprise ran after us on all fours. We hastily stumbled our way through the overgrowth and were very relieved when the male retreated to a high tree. Particularly impressive was the silence with which the animals shimmied through the forest on their incredibly long arms (spanning up to 2.5 m) as if in slow motion. We also met baboons and Thomas monkeys, who approached us cheekily. The humid forest with its huge trees, the monkey calls, the chirping of birds and rippling streams was an unforgettable experience!

In the afternoon, after a long and bumpy drive, we reached the orang-utan quarantine station in a remote river valley. This is where all Regina’s projects started 45 years ago. The aim of this sanctuary is to provide medical care to orang-utans that have lived in captivity, slowly socialize them and hopefully release them again. What awaited us was shocking. Most of the 52 orang-utans in the cages were young animals that have been kept as pets. Often their mothers were shot down when they were trying to intervene with their capture. Since a baby orang-utan apparently looks very “cute” like a kitten, moves about in an amusing way and has certain “human” traits, many people want to keep them as pets. However, within only a few years, the animals grow incredibly strong and quickly become a burden to the owners, and then end up in this sanctuary. Other animals are confiscated by the police because they have been illegally sold. There’s also a demand for young animals in some Asian countries. Unfortunately, the trade and keeping of these animals are not really sanctioned.

The orang-utans are first kept individually and are medically examined. They are tested for hepatitis, tuberculosis and malaria. If necessary, the primates undergo medical operations. A spotlessly clean operating theatre is available for this purpose. The younger animals then enter a group enclosure according to their age, where they have to build social characteristics and learn activities such as building a shelter and procuring food. From the age of six, the animals are released in groups of four in Leuser National Park in the province of Aceh. Animals with serious infirmities such as blindness or mutilation are kept as dignified as possible and will later hopefully get to spend the rest of their lives in a kind of secluded orang-utan heaven (one of Regina’s future projects). Then we headed out for coffee! The journey took over eleven hours. At higher altitudes we were engulfed by thick fog and it was quite a frightening ordeal to travel along a very winding road with poor visibility and upcoming vehicles suddenly appearing before us like phantoms.

Takengon has some 400,000 inhabitants and is situated at 1200 metres above sea level. The city is made up of the usual maze of raw concrete buildings, shoebox shops and markets. The largest economic sector of the region is clearly coffee cultivation and bean processing. We were surprised when we immediately noticed the unmistakable aroma of freshly roasted coffee. Right next to our simple little hotel was an open coffee roasting house with a 5 kg roaster. Later we discover several coffee shops that could have fit right in with the Third Wave Coffee scene. The next morning, we were welcomed by Yenni, the agronomist of Orangutan Coffee. She came from Medan and had travelled overnight by bus. She apparently called up her entire local team: Hanifan, the local agronomist, and the very friendly coffee farmer manager, Mulyadi, who is a coffee farmer himself, were introduced to us. We then visited the dry mill and the sorting plant in the suburb. The plant is rented by Orangutan Coffee. Andy, who manages the plant, explained every single step of processing the beans to us. (Orangutan Coffee plans to build its own plant with proceeds raised through a crowd-funding initiative.)

Processing Orangutan Coffee: Small farmers, organised in groups, pick the ripe coffee cherries from their coffee plantations of 1-2 hectares. In a water bath, the sub-standard cherries float on top and are skimmed off, while the good cherries sink to the bottom of the basin. These coffee cherries are crushed in a simple grinder, separating the beans from the pulp. The mills are sometimes operated by hand or by a lawnmower-like motor. The beans are then washed briefly and fermented overnight in a sealed plastic bag. Bacteria eat the slimy flesh that still adheres to the beans. Later, the beans are dried in the sun on the patios of the houses or directly on the steep concrete roads. The beans are spread out on plastic tarpaulins, which are immediately folded and rolled up with the coffee beans when there’s a risk of rain.

Once the moisture content in the beans has been reduced to 40%, the coffee is transported to the dry mill in Takengon, where the parchment is removed. In a further drying process on plastic tarpaulins spread over the huge drying area, the moisture content is further reduced to 12%. The sorting process then begins. A vibrating machine separates dirt, stones and bad beans. Then, women manually sort out the “defects” (beans that have been attacked by insects, half beans, discoloured beans and rotten beans). One worker can produce an incredible 60 kg in one day, which equates to a sack of green coffee. After hand-sorting, the individual farmers’ coffee is weighed and registered, then mixed with the beans of the farmers’ group and finally sorted out one last time in the sorting machine. The inferior quality coffee is not thrown away but sent to the local market. Unlike with coffee from all other countries of origin, Orangutan Coffee is dried according to the “dry mill” method.

In the afternoon we drove to Muyladi’s village, Wih Bersih (1300 – 1600 m above sea level) and visited its 1.5 ha coffee plantation. A group of farmers from the village began producing coffee under the Orangutan Coffee label in 2012. There is now a total of five villages whose farmers must grow their coffee according to Indonesian organic standards and also comply with other specific guidelines for Orangutan Coffee. Regina’s influence could be felt here as well. No artificial fertiliser is spread and no pesticide or herbicide is sprayed. The coffee plants are fed with compost made up of the peels of coffee cherries and green waste and is enriched with microorganisms. Unlike in Africa or South America, for example, the plants here are pruned to look like umbrellas. The trunk is never completely cut off, but the bush is kept at a height of 1.8 m.

The farmers apparently do not regret participating in the project. Muyladi claimed that the extra rewards that Orangutan Coffee generates has helped him and his family to significantly improve their standard of living. For every kilo of green coffee, Orangutan Coffee pays 1 EUR in premiums, 0.50 EUR of which goes to the Orangutan Protection Programme, 0.25 EUR goes directly to the farmer and 0.25 EUR goes to the joint cash registers of the respective farmers’ groups. Kurt and I were impressed by the whole project and the wonderful people behind it and are very happy to have this coffee in our range.

To say goodbye, Muyladi entertained us on a steep slope in front of his house with a cupping of Orangutan Coffee, which he had prepared in the simplest way. The coffee was robust and evoked memories of our coffee in Eglisau.

Learn more about this coffee on our Blog.

Any cookies that may not be particularly necessary for the website to function and is used specifically to collect user personal data via analytics, ads, other embedded contents are termed as non-necessary cookies. It is mandatory to procure user consent prior to running these cookies on your website.