Kenya lies in the middle of the equator and through it cuts the Big African Rift Valley, which was formed millions of years ago and expands by two centimetres per year. The landscape is characterised by savannahs and lakes, which rise into a central, fertile highland. And we’re particularly interested in this highland, because it’s […] 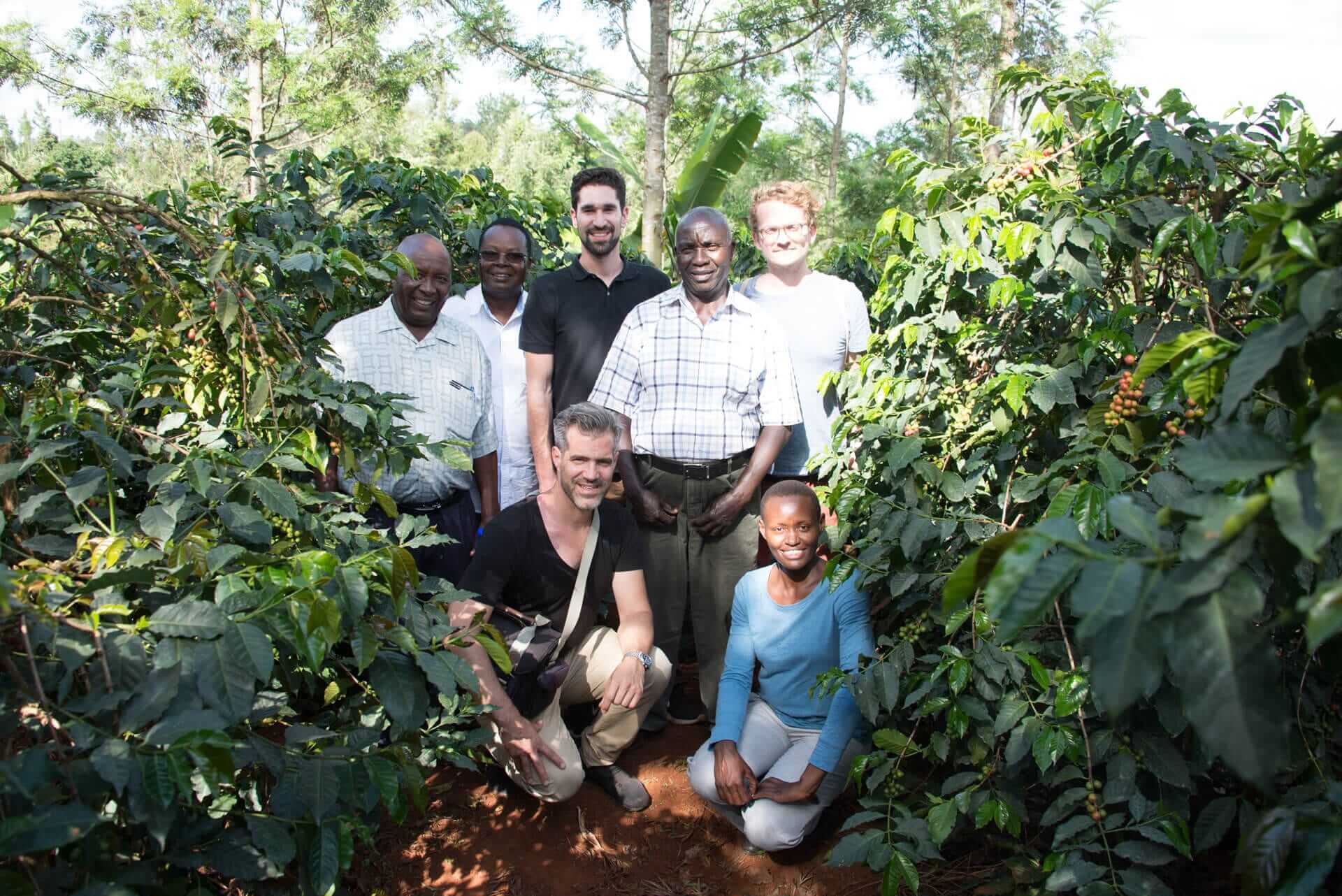 Kenya lies in the middle of the equator and through it cuts the Big African Rift Valley, which was formed millions of years ago and expands by two centimetres per year. The landscape is characterised by savannahs and lakes, which rise into a central, fertile highland. And we’re particularly interested in this highland, because it’s where crimson coffee cherries flourish. But not only coffee thrives in this Eden-like environment: Kenya has a rich tea tradition too, and the export figures for tea is ten times higher than that of coffee. Kenyan coffee is particularly high in acidity, but, at the same time, has a natural sweetness. Its strong aroma is predominantly fruity, with a hint of lemon or berry, depending on the region. Overall, the coffee is well-balanced, which makes it many coffee enthusiasts’ preferred choice.

With the blazing sun baking down on the car’s roof, we stopped at Saru Farm in the southern part of the Kiambu region. It was established by Samuel Njonjo and his son Eliud. It’s a relatively small farm that produces, on average, 35 bags of raw beans per year, which equates to 10 tons of coffee cherries. During our conversation we met two special pets, a cow and a goat – biogas produced by their dung is collected by means of a specially built system and used to operate the gas burner in the kitchen. Mr Njonjo proudly explained this process.

The Kiambu region offers many different farm types, but our interest was piqued by a farm located at 1500 meters above sea level. Built between 1940 and 1945 and now run by Robert Muala, we believe this farm represents the innovative spirit and pioneering role that Kenyan coffee farmers play in the global coffee business. Be it the way the washed beans are dried in the hot air under the black roofs of the warehouses, how the river water is used to process the coffee cherries in the in-house wet mills, or how the wastewater is sustainably managed via natural, erosion-proof lagoons. The expertise of Kenyan coffee farmers extends beyond national borders. In Tanzania and Ethiopia we noticed that many of the farms we visited were run by qualified Kenyan coffee experts.

In the many conversations we had with the small farmers, we were told how the weather changes in recent years have had a noticeable impact. The wet and dry seasons have shifted and therefore directly influence the flowering and harvesting seasons of coffee cherries. This is only one of the effects of climate change, which directly impacts coffee cultivation and export. In Kenya, 70 to 80% of all coffee trade is auctioned on the coffee exchange in Nairobi. The remaining 20 to 30% are sold directly to importers or roasters. Producers can decide for themselves whether their own coffee is traded on the stock exchange or directly. We are passionate about forming close partnerships with coffee farmers and dealing directly with them in bringing the delicious beans to our roastery.